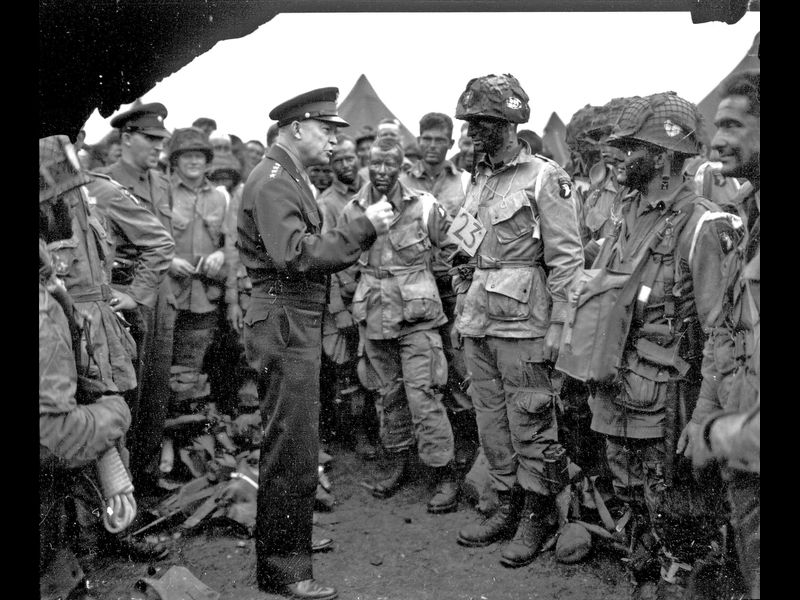 U.S. Gen. Dwight D. Eisenhower, the supreme Allied commander, talks with men of the 101st Airborne Division at the Royal Air Force base in Greenham Common, England on June 6, 1944, before they joined the D-Day invasion. (Photo credit: U.S. Army)

On June 6, 1944, one of the largest amphibious military assaults in history took place on 50 miles of coastline in Normandy, France. D-Day, also known as Operation Neptune, allowed more than 160,000 Allied troops to take an important victory in the fight against the Nazis. While upwards of 9,000 Allied soldiers were killed or injured, the assault allowed more than 100,000 soldiers to push across Europe, liberating those under control by Nazi Germany as they went. It was the beginning of the end for World War II.

D-Day for the invasion of Normandy, France by the Allies was originally set for June 5, 1944, but bad weather and heavy seas caused U.S. Army General Dwight D. Eisenhower to delay until June 6 and that date has been popularly referred to ever since by the short title “D-Day”.

As we celebrate the 75th anniversary of the D-Day invasion by members of the ‘greatest generation’, here is one little known fact:

The oldest man to storm the beaches that day was 56 year-old Brig. General Theodore Roosevelt, Jr – son of President Theodore Roosevelt. He begged to go ashore with his men, and was finally granted permission….and he stormed Utah beach with a cane due to his severe arthritic condition. His heroic actions that day earned him the Medal of Honor.

This year, for the 75th anniversary of D-Day, institutions across the country will be hosting events and exhibitions to honor the memory of those who lost their lives and to celebrate the victories of veterans. Read more here.

One Illinois man is helping to recreate the invasion. You may read more about Tim Guinan here.

If you are a veteran or know a veteran who needs any kind of assistance, please contact one of the Veterans Service Offices in our area: