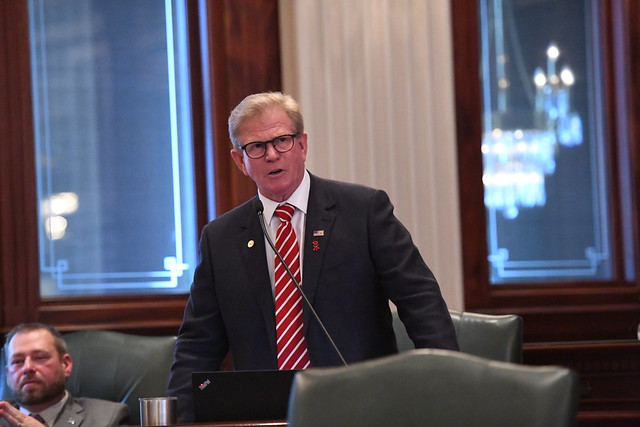 “I’m a farmer. I grow things and I fix things every day. This plan does not fix the structural spending problems that we have in this state,” said Rep. Chris Miller. “This proposal being rammed through today by the Democrats will raise taxes on Illinois families and businesses by at least $3.4 billion. There are no provisions in place to prevent future rates from being raised.”

Rep. Miller points out that these are the same Democrats who raised taxes twice (2011 and 2017), yet failed to ever pass a truly balanced budget. It will now be easier for Democrats to raise the rates under their plan, as they’ve put forth in this proposal.

“The Governor and his Democrat allies from Chicago are creating a false crisis of needing more taxes to change our long-standing system of a flat, fair tax in Illinois,” continued Rep. Chris Miller. “We have an additional $1.5 BILLION that we can use to craft a balanced budget without raising taxes on anyone. The tired old ‘tax the rich’ slogan is just like the false promise that the lottery would bring more money to education. WE all know how that turned out!”

Illinois residents are already paying the highest combined state and local taxes in the nation in addition to some of the highest property tax rates in the nation. This plan is estimated to bring in another $3.4 billion for the state to spend.

“Why should we take billions more out of responsible hands and give it to irresponsible bureaucrats,” concluded Rep. Miller. “This dream of raising more taxes is a nightmare for families and Illinois!”