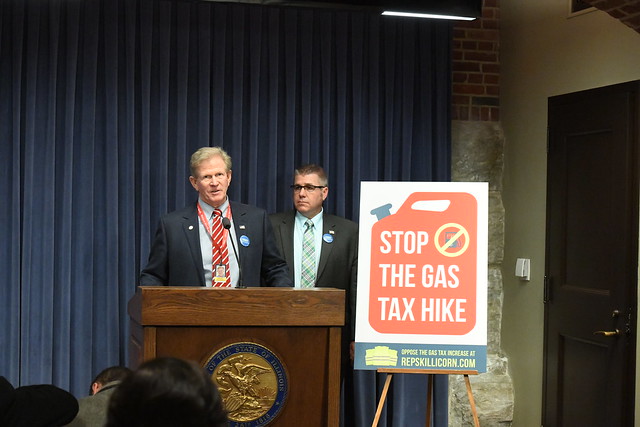 State Representative Chris Miller joined colleagues Allen Skillicorn and Darren Bailey today at a press conference at the State Capitol to make the case against the Governor’s proposal to more than double the Illinois gas tax from 19 cents to 44 cents per gallon. Additionally, the first term State Representatives expressed their opposition to Pritzker’s proposals to increase fees and taxes on everything from plastic bags to electric cars.

“I am here today to reaffirm my commitment to fight every one of these bad ideas to tax our hard-working families and businesses out of the state,” declared Rep. Chris Miller. “The Governor’s plan to raise $40 billion from taxes and fees for a capital proposal is the wrong solution. We have nearly $1.5 billion more in revenue than was projected thanks to President Trump’s policies at the federal level. That money should be used to help create a balanced budget and abandon plans to raise more taxes and increase fees.”

According to WalletHub’s March 2019 study, Illinois already has the highest overall tax rates in the nation and Miller says the Governor wants more.

“We lost a lot of good paying jobs in my area when Pioneer Oil moved to Indiana and I am worried that other employers like Toyota will be forced to leave with this continued hostile environment for job creators in Illinois,” added Rep. Miller.